In 2004 our sales figures were nearing two million, and we decided to make a solid gold commemorative capo. Why two million, not one million? We just didn’t think of it before. One million would have been better, I guess. But this worked out pretty well in some ways, since it turned out to coincide with Martin’s one millionth guitar.

I have a friend who is a great jeweler named Jon Moriarty. His shop is 14 Karats in Berkeley, CA. He made this project possible, and did most of the work that makes it unique.

To begin with, we gave Jon all the measurements of the main components of the capo. He cast the parts (which are normally extruded for production) using the lost wax method, using 10 karat gold. We opted for 10 karat rather than 14 so that it would not be too soft, and be strong enough to use. We wanted this to be a functional capo.

We then sent the gold parts to my partner, Dave, in Missouri, where he would put the proper bend in the frame and middle pieces, and join them together. When I told him how much we’d invested in the gold parts, he decided to come into the shop on the weekend when it was nice and quiet. I suggested that he follow the practice of some diamond cutters, who take a shot of brandy before cutting a priceless diamond. I don’t know whether he did that or not, but it came out fine, and then he sent it back to Jon.

Now it was Jon’s turn to do the fancy stuff. Rather than simply use our production “SHUBB” stamp on the bottom, I designed a more decorative text reading “Shubb 2 Million,” which Jon carefully hand engraved.

But the engraving didn’t stop there. Together we looked at various possible motiffs, and selected a sort of western saddle stye that seemed to match a capo. Every surface of the capo was engraved, except for those parts that would be covered by rubber. Even the ends of the frame and the rivet heads are decorated.

And just to be sure it would be special enough, we added some gems. Two diamonds were set in the bottom to highlight the text, and the head of the adjusting screw sports a gorgeous lotus sapphire.

I had my diamond cutter shot of brandy and glued the rubber pad on it, put on its sleeve, and it was a capo!

It was ready in plenty of time to bring to the 2005 NAMM show, where we had a lot of fun showing it off. Some of the most fun occured at the Martin Guitar booth. 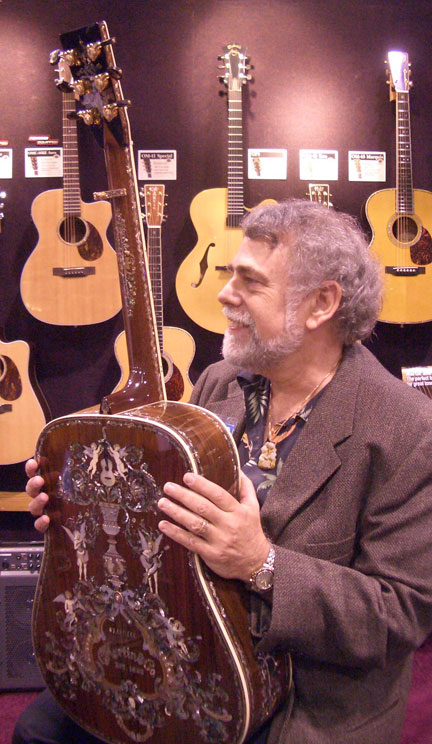 Martin Guitars that year was celebrating the sale of their one millionth guitar, and they were unveiling their special, long-anticipated Millionth Martin — a tour-de-force inlay extravaganza from the master of inlays, Larry Robinson. When I brought our two millionth capo over to their booth, the guys at Martin really go

t into the spirit of the event. Everyone was hauling out their cameras, and taking turns posing and shooting. We carried on for the better part of an hour playing with our fancy toys, and visitors to the booth were enjoying it, too. It was pretty remarkable that these two landmarks came together as they did, and that the capo looked like it was made for the guitar.

Since then, I have brought the solid gold capo to most of the shows, and a few selected players have used it for special performances.

What is it worth?

Naturally lots of people asked me that when I started showing it off at the trade shows. I had no answer. My friend, Jon, didn’t charge me for his time, and only his own cost for the gold and jewels. 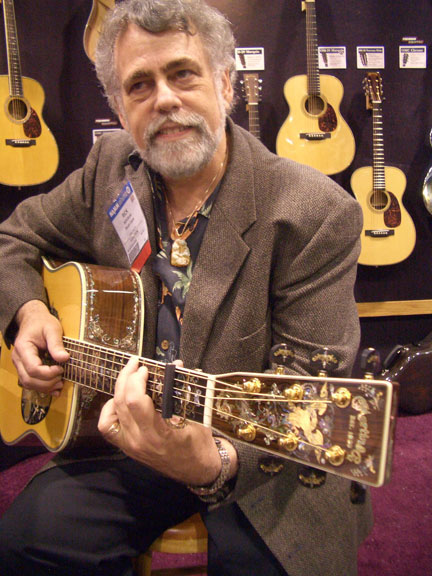 There have even been some people who suggested that I should offer a solid gold, diamond-studded version of the capo as a custom option, and that someone would be rich enough, and want it badly enough to pay the price. Well, even if that had been true then (which I doubted), it would not be true now. The price of gold has skyrocketed, and no one is putting that much gold into a single piece any more.

Want to prove me wrong? Make me an offer. 🙂

Will we make any more solid gold, commemorative capos?

Not likely, unless the price of gold goes way back down.  At one time I mildly considered making the five millionth as a solid gold banjo capo (you know, five for 5-string?) and using it myself. But now sales have surpassed six million, and besides; I couldn’t have afforded it, anyway.