I’ve always had a knack for drawing, and drew a lot when I was a kid. I attended California College of Arts and Crafts, but didn’t learn much there. I was more interested in playing music, and only lasted for three semesters at college.

In my late teens and early twenties I carried a sketchbook, in which I doodled with either pencil or pen (a #000 Rapidograph). I still have some of the pages from this sketchbook, which capture the mood of those late night pot smoking sessions in Palo Alto.

The Smokey Grass Boys played for a few months in 1966-67. I drew three letter-size, B&W flyers for the band. 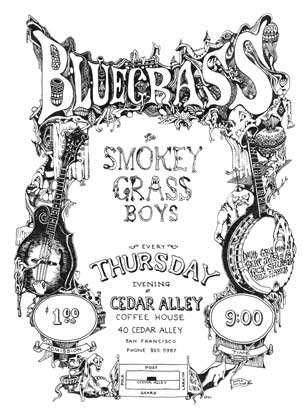 The group consisted of David Grisman on mandolin, Jil Haber on bass, Bert Johnson (later Herb Pedersen) on guitar, and myself on banjo. 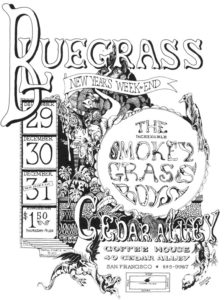 The fliers didn’t have much to do with the music, but they seemed just fine for the Smokey Grass Boys. 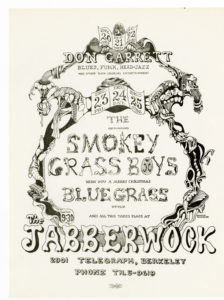 I may not have learned much at art college, but shortly after dropping out of school I met an artist named George Metzger, whose work in underground comics and fanzines was well respected. He took me under his wing, turning me on to some great comic artists, and showing me various techniques used in preparing artwork for reproduction. I learned far more from him than I did at California College of Arts and Crafts.

Here is a B&W lettersize flyer I drew for the Berkeley Fiddlers’ Convention. I also played in the event, along with being one of its planners. 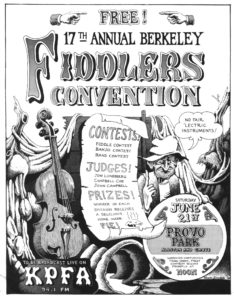 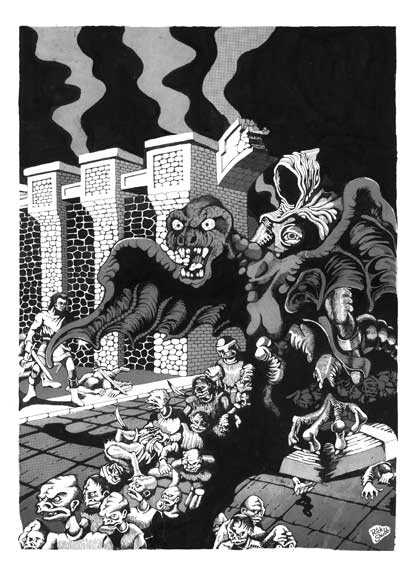 An oil painting with ink highlights, circa 1965.
Can you identify the faces? 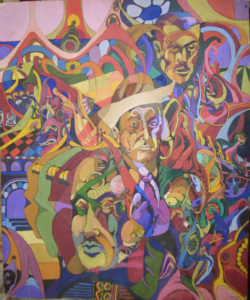 It was only open for a few months, but in its heyday, the Carousel was the hippest of San Francisco’s rock palaces. It was operated by three of the top rock bands, including the Grateful Dead. When they were looking for a poster artist who could give them a distinctive look, Jerry Garcia recommended me.

Previously the art I had done for reproduction was all in black and white, but rock posters needed color. This would turn out to be an adventure in itself.

The three Carousel posters that were printed are included in The Art of Rock, the definitive reference work on pshycheledic poster art. 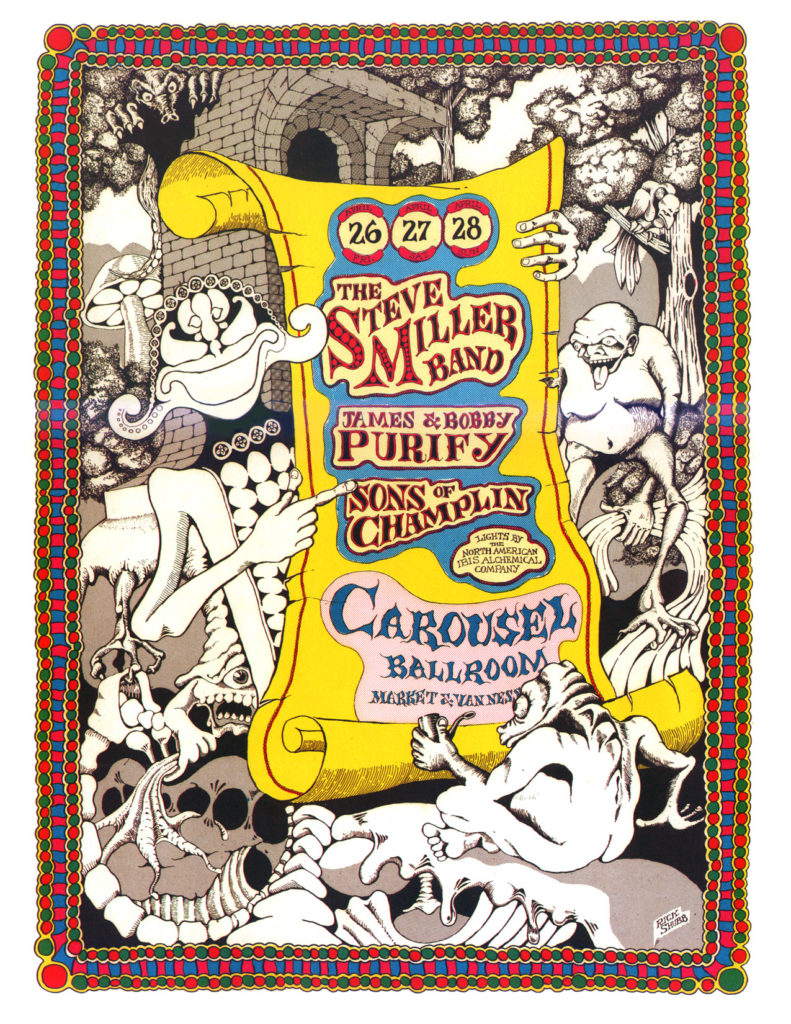 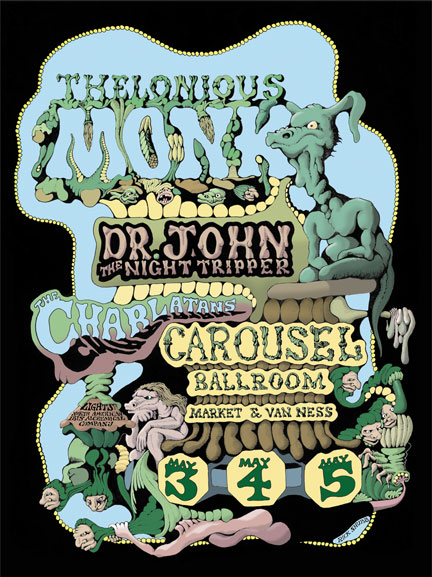 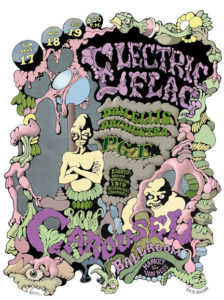 My fourth Carousel poster was nearly finished but not printed, since the Carousel closed down the week before: Jimi Hendrix and B.B. King might have saved the day. 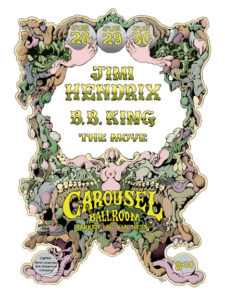 Humbead’s Revised Map of the World

Perhaps my best known poster, it sold through three printings. The artwork got cleaned up a bit for the second printing, and it was redrawn entirely for the third. Shown here is the rare first printing; least attractive of the three to me, but most desirable for a collector.

Humbead was a nickname for Earl Crabb, whose sketch on a piece of scrap paper inspired this map. You can read about the day we met and laid the groundwork for Humbead’s Map of the World here… 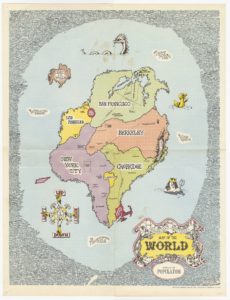 The album, titled simply Record, was partly produced but never released; another incomplete project. It would have been the first produced by Grisman, featuring an all-star lineup of his friends. He asked me to do the jacket art, and gave me a free hand to do whatever I wanted.

As it turned out, like my earlier Smokey Grass Boys flyers, the art didn’t have much to do with the music. But David liked it anyway, and besides, since it was never released, what’s the difference? 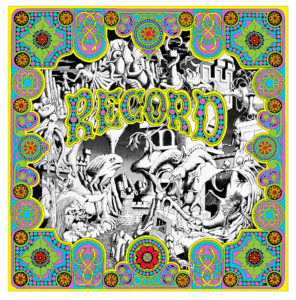 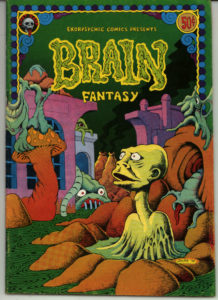 George Metzger introduced me to  the publishers of Last Gasp comics, Ron Turner and Gary Arlington.  They were fans of the old EC comics, and were setting out to create a line that would be an homage to EC. They had a title in mind for a Sci-Fi/Fantasy comic: BRAIN Fantasy, which would be a companion title to their already existing SKULL, a horror comic. They picked me to be the editor and main contributor for the new title.

For the first issue I did the cover and two of the four stories. That turned out to be so much work that I wasn’t able to follow quickly enough for a second issue, so someone else did Brain #2. I set to work on Brain #3, working on a cover in the same style as the first, and a lead story that was continued from issue #1. But as far as I know, the title died after the second issue. I still have the unfinished cover and story art for #3 in my office. 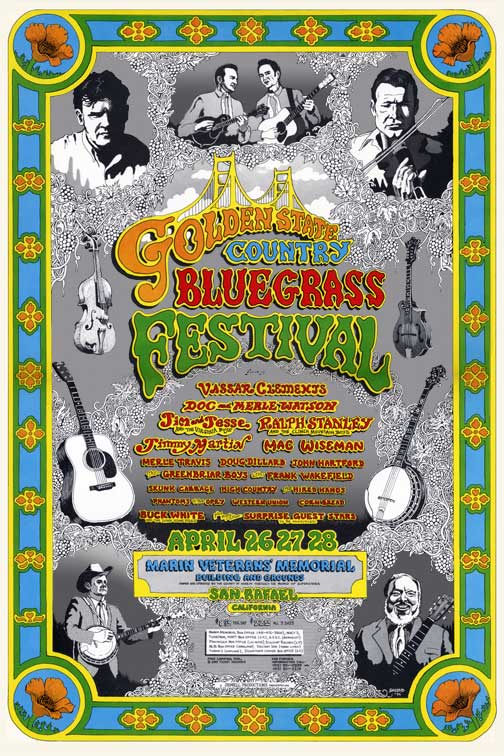 This was the first major bluegrass festival in northern California. The festival was an ambitious endeavor, and the poster was an adventure in itself. As the dates approached, the prodigious lineup of talent kept changing from day to day. In those pre-digital days, that meant covering names with white-out, or gluing new drawings on with rubber cement. Unlike my Carousel posters, I had plenty of time to work on this one, but last minute changes had me working into the wee hours on the night before it went to press.

The show itself was awesome, with surprise appearances by many top artists not listed on the poster. They included Emmylou Harris, Steve Martin (neither of whom were yet the stars they would become), Great American Music Band (David Grisman’s group at the time), and, most notably, the Nitty Gritty Dirt Band and Old and In The Way. These bands — for this audience at this time — generated more interest and excitement than the first generation bluegrass stars who were the core of the advertised lineup.

In spite of all that, the production lost money. So there was not a “second annual.”