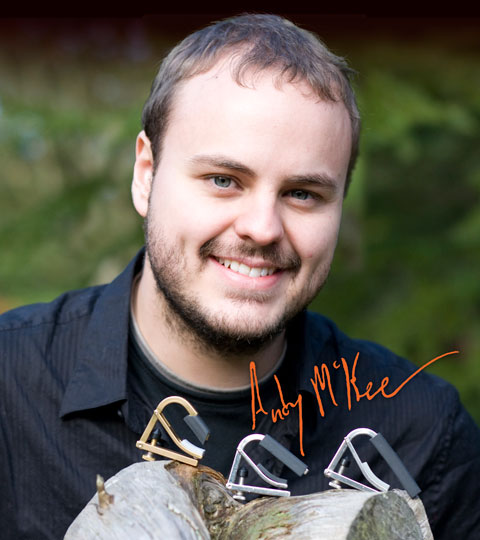 Several years ago I suddenly started getting dozens of emails asking me that question. But I had a couple of questions of my own: who was Andy McKee, and what was Rylynn? It took me only a minute to find the answers on YouTube. Of course I was pleased to discover that he used a Shubb banjo capo, applied from the bass side, covering the bottom four strings of the guitar at the fifth fret.

My other questions were answered as well, as I learned what millions of people apparently already knew: that Andy McKee is an exceptionally talented young acoustic guitarist, and that his video of Rylynn, his own instrumental composition, had been viewed by millions and millions of people.

And he’s not a one-hit-wonder, either, for he had posted several other videos of his instrumentals, and they all were just about as popular. I’m sure by now that the total views for all his videos must in the 100s of millions.

This blows me away, in the very best sense. These videos didn’t have any mayhem, or stupid humor, or pop stars, or sex, or anything one would typically associate with huge popularity; just a guy sitting in a chair playing his acoustic guitar, and they were at that time — literally — THE MOST POPULAR thing on YouTube!

Seriously. This makes me feel so good. It goes a long way towards undoing my own cynicism regarding public taste; what can and does become popular. Andy McKee is a new kind of superstar, and he totally deserves it.

With a bit of detective work I tracked down his email address, and got in touch. We arranged to meet at the NAMM show. Since he was so much the picture of intense concentration on those early videos, I was surprised by his vivacious and warm personality; a really nice guy, and seemingly unaffected by his enormous popularity. And I was especially pleased with his enthusiasm for Shubb capos. He uses them exclusively on all of his performances, and they are even an integral part of his creative process.

In the years since, our friendship with Andy has continued to develop. He never fails to stop by and visit us at the trade shows, usually favoring us with a few tunes, and we participate in his camps and seminars by furnishing regular and partial capos for his students.

Using a Shubb Capo won’t make you play like Andy; if only it were that simple. But it is a step in the right direction.