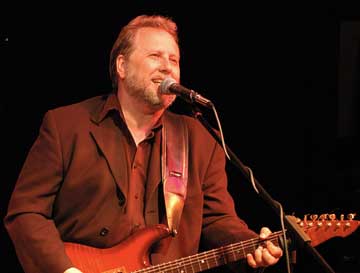 Sometimes an artist’s talent just flat out resides in the DNA. Bobby Cochran is a tremendous in demand session guitarist and band leader who pushes his boundaries while at the same time pays respect to his roots and influences. And his biggest influence would have to be his uncle, the late legendary rockabilly guitarist Eddie Cochran.

Bobby has played with notables as Steppenwolf, the Flying Burrito bros. and Leon Russell. He also produces albums for many top artists.

Like most artists I’ve meet, I met Bobby at a NAMM show. About 4 years ago he was strolling the halls early before the onslaught of humanity had entered the building. He was very nice and gave me a CD. I listened to it on the drive home and was surprised that such a good guitarist could fly under my radar.

I’ve seen Bobby at many trade shows since then and he is always quick with a smile and hello and a chat. Must be in the DNA. Thanks Bobby!