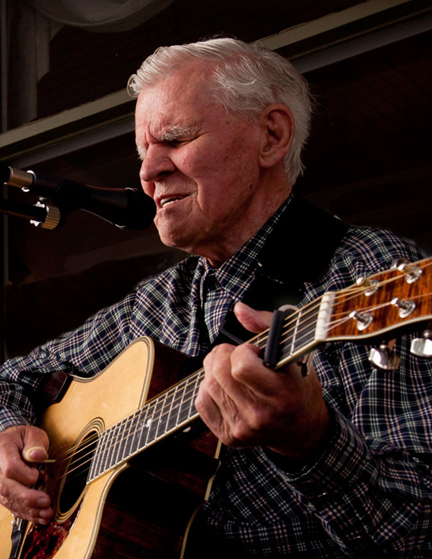 Sadly, Doc has left us now. I’m proud to say I knew him, and played music with him. There will never be another like him.

Someone once commented on Doc’s Shubb Capo as he was putting it on his guitar. Doc said, “Son, I knowed Rick Shubb before there was a Shubb Capo.”

He’s right. Hank Bradley, the great oldtime fiddler, introduced me to Doc Watson when I was about 19 or 20; many years before the first Shubb Capo.

Doc always loved to play fiddle tunes on the guitar, and he liked Hank’s fiddling. Hank liked my banjo playing, and thought the three of us would be a good blend. We played a few tunes and it really clicked. Doc liked it so well that he started inviting us to play on his shows. He was touring as a solo at the time, and at the end of his sets he would invite Hank and me onto the stage for 3 or 4 fiddle tunes. We joined him on the West Coast portion of his tour, playing concerts and clubs including the Jabberwock in Berkeley and the Ash Grove in Los Angeles.

During that period we recorded about a dozen fiddle tunes with Doc and he submitted the tape to his label, Vanguard. They didn’t go for it. Too bad. It really would have been a feather in my cap, and Hank’s too, to have been on an album with Doc Watson. I still have that tape, and it still sounds great. Nobody has ever played the fiddle tunes like Doc.

When we were playing with Doc, it was during the folk boom of the 60s. Doc had just recently been “discovered.” He was the next big thing, and to some fans he seemed too good to be true. They wondered if his charming, down-home personality he projected from the stage was genuine, or if he was putting it on. Well, I can tell you, it was the real Doc. But to judge him as a country bumpkin would be a mistake. He was an extremely intelligent man, and aware of his image. Folk fans then were caught up in the question of “authenticity,” whatever that meant. Doc once confided in me, “Son, I’ve listened to too many classical and jazz records to be authentic.”