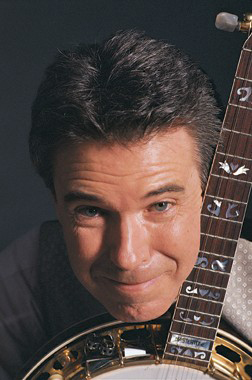 The day I met Doug Mattocks was the same day I met John Jorgenson, Dick Hardwick, and Charlie Warren. They were the Thunder Mountain Boys (aka Main Street Maniacs) playing in the streets of Disneyland.

I was paying closer attention to the band than they were accustomed to, especially Doug’s playing and his banjo. His neck had an inlay pattern that was unfamiliar to me, and I also observed that he had a Shubb 5th string capo mounted on it. After the set, I asked him about the banjo neck.
“I made that myself,” he said proudly.
“Well, you didn’t make this part,” I said pointing to the 5th string capo, “because I did.” Which was true, but deliberately cryptic, and he was appropriately confused.
“No, I bought that in a store,” he responded.

Dick Hardwick loves to tell that story. He tells it funnier than I do, but my version is accurate.

Doug is one of the very few people — in fact, the only one that I know — to master both the 4-string and 5-string banjo. He is especially revered among 4-string players and fans, and is in the 4-string banjo hall of fame. One day he was bemoaning the fact to me that he had to carry two banjos to his shows, and asked if I could come up with something that would enable him to use just one. I designed a little padded clip that I affixed to the head of his 5-string. He tucks the fifth string under the clip, bringing it below the level of the other four, so he can play it like a 4-string. A simple little gadget, but he loves it. Now he brings a single banjo to most gigs. I probably shouldn’t have mentioned that here, because I really don’t plan on making any more of these things.

A banjo star since his youth, Doug has also quietly become a world class guitarist, specializing in a beautiful chord-solo style that is not commonly heard these days. If you pick up his guitar, you’ll put it back down in a few seconds. He uses an unusual tuning, developed by Carl Kress in the early 30s. Clever way to keep people from playing your guitar