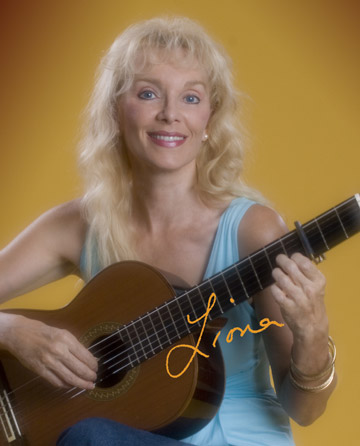 You might say that Liona Boyd is now in her second career. Known for years as one of the world’s greatest classical guitarists, eventually the stress put on her hands by this demanding instrument took its toll. She developed a condition that limited the use of her hands. She can still play, but she cannot put in the long hours of intense practice required to maintain the level of a classical virtuoso.

Unwilling to give up the love of her life — the guitar — she embarked on a new direction that included singing, shifting the emphasis from being an instrumental soloist. It was at that juncture in her career that I received an email from her:

“I have been experimenting with various capos and find yours to be the best as far as ease of application and aesthetics. Being mostly a classical player I really haven’t used capos before but now I’m adding some vocals to my new CD a capo is essential!”

Soon after that I was on the phone with her, discussing capos, and making sure she would get the correct model for her guitar. At the time, all she had tried was one of our steel string model capos that a friend had loaned her. Once she got her hands on our nylon string capo (the right one for her guitar, of course) she was quite excited. I asked her if she’d be interested in appearing in one of our magazine ads, and she said:

“Rick, I LOVE your capos and would be delighted to represent them!”

When I spoke with her, there was no sob story regarding her hand problem, or even a mention of it. On the contrary, she was upbeat and excited about her vocals and this next phase of her career. She is modest about her singing; as an instrumental virtuoso, her standards are sky-high. Her singing and her songs are lovely, and we still get glimpses of that guitar playing, albeit in smaller doses, that made her internationally famous as The First Lady of the Guitar.