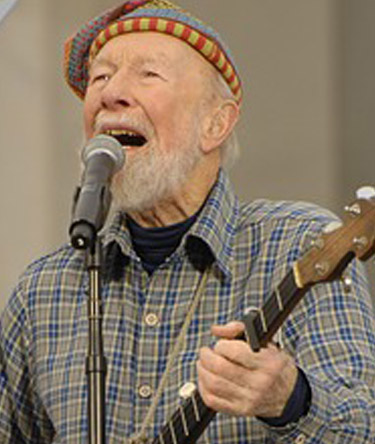 When the Shubb Capo was still very new on the market, I got an order in the mail for a 12-string guitar capo, along with a check, from Pete Seeger. I sent him the capo, along with a banjo capo, and his check, and a note saying “what sort of a son-of-a-bitch would I be if I didn’t give a capo to Pete Seeger?” He sent me a lovely thank-you note, including that little sketch of a banjo that often embellishes his signature. After that, whenever I saw a picture of him playing his 12- string, his Shubb capo was on the neck.

I answered, thanking him back. and we exchanged a few more letters in those days of yore, before email.

Practically every musician of my generation who arrived at their favorite style via the folk route, and especially banjo players like me, could thank Pete and list him among their major influences. And I’m not just talking about a basic strum; he gave us an appreciation for music with roots, and provided a model of how that music can be tied to personal integrity and respect for humanity.

If not for his enormous influence on American music and musicians, who knows what I’d be doing today? Thousands could say the same. When I think about the fact that I’ve made a gadget that was used almost every day by this man who was an icon since I was a kid, well …I’ve gotta say the circle is unbroken.