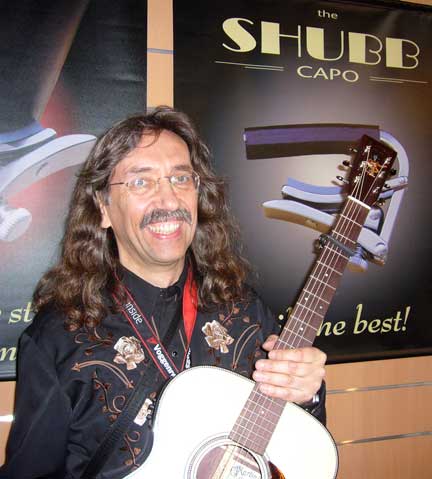 I recall on one of my first trips to the Musikmesse trade show in Frankfurt I was walking by the big German sheet music distributot Voggenreiter’s exhibit and noticed this animated charater they had in all of their guitar instruction books. This wild-eyed guy looked a little like Frank Zappa and was definitely a rocker. I thought it was a character they had made up for sure.

Later on I was at our booth and lo and behold I looked up and and the cartoon guy had come to life and was standing right in front of me! He introduced himself as Peter Bursch and I found out right away he was a very charming man and later I found out a great guitarist as well. He explained to me that he had used our capos for years.

Peter is probably Germany’s greatest music ambassador and widely known there for his concerts and teaching. In the 70’s and 80’s he produced “Rockpalast” a German television music show in the vein of “Don Kirshner’s Rock Concert’ or “The Midnight Special”. So he’s sort of the “Wolfman Jack” of Germany as well.

One night I went to see Peter play in a smaller venue and he knew that I was coming by myself and since I don’t speak German, might feel a little isolated there. So when I arrived he made a point of introducing me to some Australian guys right away(who ended up becoming good customers of ours) and then proceeded to put on a great show. So even though he was getting ready to perform he wanted to make sure I was comfortable in this setting. That’s the kind of guy he is.