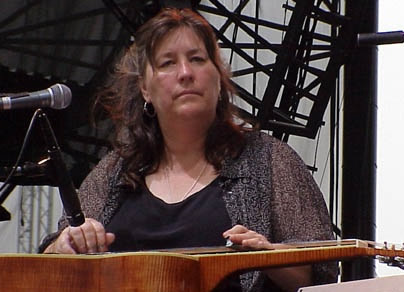 Just before she moved from California to Colorado, Sally worked at Shubb Capos. One day in the course of casual conversation, she said that she thought she might have been the first female instrumentalist to win a Grammy. She didn’t make any big deal out of it, just happened to mention it. There have been plenty of women who have received Grammies, some of whom played an instrument, but they were being honored as singers. Sally’s Grammy (the Dobro Sessions) was strictly for playing.

She was awfully modest about it, but I think that’s a pretty big deal. Maybe someone who’s historically inclined could research it for us. In any case, Sally’s musicianship is special. Any discussion of the top Dobro (or if you prefer, resophonic) players always includes her name.

When I was developing my Dobro capo, Sally was a source of expert advice. She would test prototypes for me, and offer suggestions for improvements. When she was satisfied, and the process had also been repeated with Pete Grant, the capo was ready to go.

Later, when I already had two models of Shubb-Pearse Guitar Steel on the market, Sally suggested that there should be a third model. We worked together to design a bar exactly to her specifications, and the SP3 was born.