I have a few banjos, including a Prucha, a Nechville Phantom, a Gold Tone that sports the first ever graphite neck, a Deering Calico, A Gold Star, a Saga travel banjo, and a Huber. I like each of these banjos quite a lot, and each has something unique to offer. But my main instrument — the one I will always use to perform or record — is my prewar Gibson.

I say prewar, although many of its parts are not original. It is a conversion, and by no means a grail (ultimate collector’s banjo). But it is a player’s banjo, and it sounds great.

When I bought it in 1964 from Jon Lundberg it was an archtop plectrum. Jon converted it to a flathead using an Ode tone ring. I shipped it to to Robby Robinson in Ohio who built the mahogany 5-string neck. Regrettably, the original neck was not preserved. Most of us didn’t think about such things in those days. It was trashed and some of the inlays re-used in the hearts-and-flowers 5-string neck.

In the early 70s I replaced the resonator with a top-tension style maple resonator built by Bob Palmer. The original mahogany resonator, along with the original 40-hole archtop tone ring, became part of another banjo that I sold. Again, I had not yet developed much of a sense of history or respect for the antique value of the instrument, and since these parts didn’t serve my needs, they were moved along to pay the bills.

If I had it to do over again, I would save all the parts. I’d preserve the original plectrum neck, and duplicate it faithfully as a 5-string. But I was a kid, and I wanted it to look like Earl’s.

I can’t remember now exactly what the plectrum neck looked like. Maybe some banjo expert could help me figure it out.

As for its present setup: of course, I use my own 5th-string capo and compensated bridge. Its 5th string nut is in line with the (shortened) 5th fret, a setup I prefer and recommend.

I use a clamshell tailpiece which is not the original (4-string. long gone), but it is very old. It’s the one I got in ’64 when the neck was built.

A few years ago I added a wooden armrest made by Tom Nechville, which is very comfortable and looks cool. I still have the original armrest around someplace.

I use a Remo Weather King head, and usually keep it just a lttle looser than most people do because it gives me the darker sound I like. I adjust the tension by feel and tone rather than tuning it to a note, but I’m going to try that some time. I’m sure it’s a good method. My banjo has been sounding really good to me for quite awhile, so I’m reluctant to change much about it.

The tuners are all Keith (Beacon Banjo Co.) 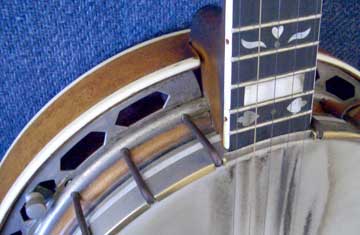 If you’re an expert on old Gibson banjos, maybe you could tell me more about it. I’d be curious to know.

I’ve been told that it was made in 1932 or 1933. Inside the rim is stamped 9427-32. There is no oval sticker, but it may have had one at one time.I didn’t take any pictures of the plectrum neck, and now 50 years later I’d like figure out what it looked like. I think the banjo may have been a Studio King. That name has stuck in my mind relative to this banjo for all these years, so it must have been on there.

But I’m pretty sure that the peghead was not that of a Studio King, and I’d almost swear that the neck had the word Gibson and maybe Mastertone somewhere on it. As a teenaged Scruggs fanatic, I don’t think I’d have been savvy enough to buy it if it didn’t have one or both of those words reassuringly identifying it.

I guess I could be mistaken about some of this; I’ve seen lots of old banjo necks over the years. But I’ll bet it was one of those Gibson anomalies: a pairing of neck and rim that was not in the catalog.

Some of the inlays were reused in the 5-string neck (above). They were some version of hearts-and-flowers. Any ideas, banjo people? When was it built? What did the neck look like? What the heck was it?

To me, the best sounding banjos are old banjos. Some new banjos do sound better than some old banjos, and of course setup is a big factor. Certainly the player is the single most important tonal factor. But everything else being equal, old banjos sound better to me. There is more of a difference in playing them than just listening. It’s as much a matter of feel and response as it is one of tone.

I don’t think that banjos were built better before World War II. I think they’re being built better now. But the magic ingredient is time. Time and use. All good instruments improve with time and use. If you take one of today’s good banjos – and there are many good ones – and play it for five years, it will sound much better. Incidentally, so will you. Ten years, better yet. And so on. In another fifteen years many of the banjos being built today will probably sound as good as prewar Mastertones sound now.

On those early Flatt & Scruggs records, Earl’s banjo was not yet 20 years old. Microphones of that era were not as accurate as today’s, but then again, an oil painting is not as accurate as a photograph. Besides, when it comes to tone, the Earl factor trumps all.