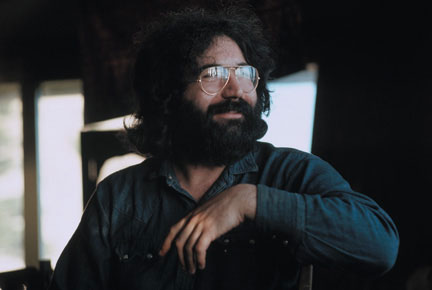 Shubb Capos’ first customer. That’s right, it was none other than good ol’ Captain Trips himself.

Our first product was our fifth string capo, and the first one I installed (besides my own) was on Jerry’s Weymann banjo. Later he would use our regular capos on both banjo and guitar. I don’t think he ever used a capo on electric, but of course he had an entire separate career playing acoustic, and his capo of choice was a Shubb.

I knew Jerry Garcia beginning in the early 60s. It was exciting time; a time of change and growth, and we shared various firsts together. In 1965 we were roommates, along with a few others, in a house in Palo Alto for a few months. We were never in a band together, but we did pick in the living room now and then.

It was during this time that his jug band became a rock band. I did the artwork on their first drumhead. I remember well the night he came home from a practice, sat down on the couch, and told me he’d renamed the band. “To what?” I asked. I thought Warlocks was a pretty good name. He grinned on the verge of a laugh, as he did when he was about to lay something fun on you, and said “the Grateful Dead.” It seemed like he might be trying to convince himself that the strange new name was OK.

Our paths led in different directions, and I never got back in touch with him during the last several years of his life. No particular reason; it just didn’t happen. I wish it had. There are plenty of people around who knew him much better than I did, but I knew him pretty well in those early years. Was he as charismatic as people say? Absolutely.

also of interest: My association with the Carousel Ballroom